With its distinctive taste and mottled crust, there are few loaves of bread that look as impressive as the aptly named “Tiger Bread” (also known as Giraffe Bread, Dutch Crunch and Dutch Crust). Using this recipe you can bake one for you and the family. Or just for you.

The amount of sesame seed oil can be varied, depending on how much of its flavour is desired. Balance the change with the amount of warm water, so the total liquid volume is 425ml.

This method is almost the same as the easy home-baked bloomer loaf. It’s worth referring to that post for a descriptive version and pictures of the basics of this recipe. 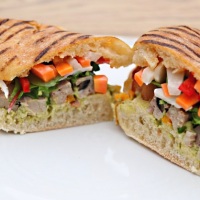 Disclaimer: some posts in this blog contain Amazon affiliate links. Should you choose to buy from Amazon, you will not pay more, Amazon will give me a small commission. This helps pay for the blog hosting.
Information about our Amazon associateship
© 2016 - 2020 The Cook's Digest.
Copyright statement
%d bloggers like this: